YA Novel ‘We Hunt The Flame’ Adapted For STXtv

Production companies are looking for the next hit YA novel like never before. The latest noteworthy acquisition is Hafsah Faizal’s We Hunt The Flame. STXtv recently optioned the rights to turn the magical adventure story into a one-hour series. 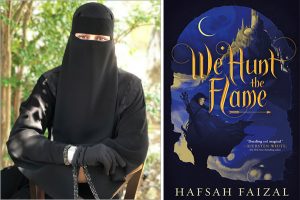 Set in ancient Arabia, the YA Novel centers around a female hunter competing against an assassin prince to bring magic back to their kingdom. In the fictional land of Arawiya, the huntress Zarifa disguises herself as a man simply known as “The Hunter.” The goal? To journey into the dangers of a mysterious cursed forest to bring food back to her village. The threat of war and the ominous cursed forest begin to close in on the village, so Zarifa embarks on a quest to find an amulet that will restore magic to the kingdom. However, she’s not alone. The King’s assassin-son, Nasir, called the “Prince Of Death,” has been hired to find the amulet and kill The Hunter.

We Hunt The Flame explores themes of magic and war inspired by Arabian Nights…with a feminist twist. If the villagers discover Zarifa’s true female identity, all of her heroic efforts will be null in her male-dominant society.

Hafsah Faizal was born in Florida, raised in California, and now resides in Texas with “a library of books waiting to be devoured.” In a 2019 interview with ABC when We Hunt The Flame was first released, Fazial talks about how her Muslim identity influenced the writing of the book.

“At the time, most of the fantasy that I read and that I knew about was all Eurocentric, so I was setting my story in a Eurocentric world too.”

When Faizal began writing the story she realized the place she really envisioned was straight out of her heritage.

“I thought, ‘Why am I not setting it in a place that is more familiar to me?’”

So Faizal went back to the drawing board and changed the location from ancient Europe to Arabia, making We Hunt The Flame what it is today.

The author also confessed her anxiety about revealing to her readers that she wears a hijab. A friend had told her some years prior that a publisher would not want to work with a woman who hides her face. When writing the final version of We Hunt The Flame, Faizel decided to do something she hadn’t done before–post a photo of herself online. Then 25-year-old Faizal was worried her hijab might be off-putting to readers. She was happy to discover no one batted an eye. Her readership swelled and she has continued to build up a promising career as a YA novelist.

What’s Next For Hafsah Faizal

In fact, the now 28-year-old author has accomplished quite a lot. In 2019, We Hunt The Flame made the New York Times Bestseller List at #5. STXtv is now developing the YA novel for television. Not to mention two of the nation’s top publications gave her some serious props. Last year, We Hunt The Flame made Time Magazine’s “100 Best Fantasy Books Of All Time.” This year, Faizal made the Forbes “30 Under 30” list.

Folio Literary Management secured the adaptation deal for author Faizal, who has also signed on as executive producer. STXtv’s Director of Development Lindsay Harrop is in charge of bringing the project from page to screen.

In January, Faizal released We Free The Stars, the sequel to We Hunt The Flame. And there’s plenty more coming down the pipeline. Publisher Macmillian secured the rights to her next series, A Tempest Of Tea. We can expect more screen adaptations of Faizal’s work given the high demand for YA novel acquisitions. Also, the recent option to adapt her most-acclaimed book for TV can’t hurt her career. Stay tuned!

If you enjoyed this piece, check out YA Novel ‘Mice’ Feature Film Adaptation