Last year screwed up a lot of releases, including the film adaptation of Tom Clancy’s Without Remorse starring Michael B. Jordan. Paramount and Amazon finally settled on a release date of April 30, 2021, for this franchise thriller. The original October release was delayed due to Paramount’s stalled negotiations with Amazon, who will release the film next month.

Without Remorse is among a handful of features Paramount sold to streaming services last year to help absorb the impact of unprecedented theater closures. The film is at home with Amazon, the service responsible for hosting another Clancy franchise, the Jack Ryan TV series. 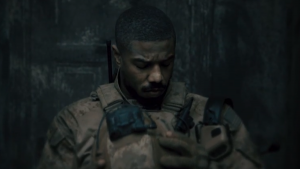 Michael B. Jordan as John Clark

US Navy SEAL, John Clark, finds himself locked in a conspiracy when he sets out to avenge his lover’s murder. The original story takes place in 1970, following John Clark’s service in the Vietnam War. When Clark returns stateside, he unwittingly saves a drug mule/ prostitute and falls in love with her. The lovers are attacked by her former pimp’s gang and Clark is gravely wounded. Upon recovering, he wages a private war on the pimp gang/drug ring who killed the love of his life. In the process, Clark discovers the drug ring has been smuggling heroin through the bodies of dead American soldiers.

Without Remorse is the origin story of John Clark, the first in a series of Clark novels, two of which have already been adapted to commercial success. Previous films featuring the late Tom Clancy’s beloved character are Clear And Present Danger with Willem Dafoe and The Sum Of All Fears with Liev Schreiber.

Liev Schreiber as Clark in THE SUM OF ALL FEARS (2002)

Willem Dafoe as Clark in Clear and Present Danger (1994)

In true Clancy fashion, we can expect plenty of action and politics in this all-American thriller. Stefano Sollima, Italian director of A.C.A.B. All Cops Are Bastards and Sicaro 2 is on board to direct. He’s no stranger to political shoot-em’ ups, but Without Remorse might serve as a primer for the upcoming Call Of Duty film, which Sollima is also directing.

Skydance Media, the company bringing us recent Mission Impossible and Terminator films, is behind Without Remorse, along with several blockbuster-action-flicks in development.

Screenwriters Taylor Sheridan (Hell Or High Water) and Will Staples (The Right Stuff 2020), teamed up to write the Without Remorse adaptation. Interesting that director Stefano Sollima and writer Taylor Sheridan now find themselves collaborating: Sollima directed the sequel to Sheridan’s film, Sicaro. Along with impressive feature writing credits, Sheridan has appeared onscreen as an actor featured in Sons Of Anarchy and others.

Fellow Without Remorse writer, Will Staples also wrote The Tiger Mafia and Shooter TV series. Staples has another 2021 film coming out, Sweet Girl along with ten scripts in various stages of development.

If you enjoyed this piece about the Without Remorse film, check out the 14 Most Underrated Book-to-Film Adaptations