It’s not uncommon for production companies to option a YA novel for TV. However, we don’t hear a lot about authors adapting their own work for the screen. Well, author Adam Silvera is the exception in more ways than one. 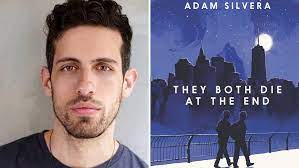 Entertainment One has acquired the rights to Silvera’s 2017 HarperCollins release They Both Die At The End. The book is currently #1 on the New York Times YA paperback bestsellers list four years after publication.

Silvera gives the climax away in the title but this story is about much more than the finish. The author weaves an uplifting tragedy about how two lives are fulfilled over the course of one fateful day. They Both Die At The End is the first YA novel featuring queer Latinx characters to make #1 on the NYT bestsellers list.

The book takes place in a parallel universe where dystopian technology exists. An app called Death-Cast mysteriously knows when and how each living person on the planet will die. Death-Cast sends a convenient notice straight to your phone when your number is up. Mateo and Rufus were total strangers before they both received a Death-Cast alert for the same End Day.

The two meet on another app called The Last Friend that pairs compatible matches slated for the same End Day. Rufus and Mateo agree to meet for the adventure of a lifetime before the final curtain. Their goal is to go out in a ball of flames and live the most extraordinary lifetime in their last day on earth.

The premise is the perfect breeding ground for romance and adventure, and Silvera takes full advantage. Playing on the fantasy question, “What would you do today if you knew you were going to die tomorrow?” the author takes readers on an adventure that could only take place between the pages of a YA novel…until now.

Silvera Adapts Own YA Novel For TV

Entertainment One EVP Jacqueline Sacerio is overseeing the project along with More Happy Than Not. The adaptation is in the beginning stages with author Adam Silvera slated to write the script.

If you enjoyed this piece, check out Indian YA Novel ‘Along Came A Spyder’ Series Adapatation