Dig slashers? You’re in luck! A gory new adaptation in the vein of Scream hits everyone’s favorite streaming service this month. What’s the big deal? We’re midway through February and the actual release date is still a mystery. So flood your eyes with blue light and just keep refreshing that Netflix home page until the film There’s Someone Inside Your House pops up. In the meantime, we’ll tell you everything we know about it here to satiate your obsession with blood and guts pouring out of Nebraska teenagers.

Stephanie Perkins made a name for herself writing YA romance novels such as the Anna and the French Kiss Series. In 2017, Perkins made a bold departure from YA romance with her first foray into horror with There’s Someone Inside Your House. Her follow-up horror novel The Woods Are Always Watching is slated for release this fall. 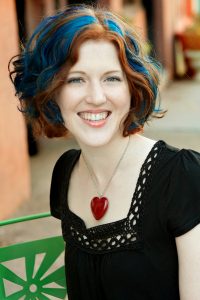 Makani Young moves from Hawaii to small-town Nebraska to finish out high school living at her grandmother’s house. She and her new classmates find themselves hunted by a killer bent on exposing their darkest secrets. How could she have known? This personification of high school gossip takes the form of a killer wearing a realistic mask of his next victims’ face. In Scream-like fashion, Makani and her friends must band together to expose the killer’s identity before they’re next. 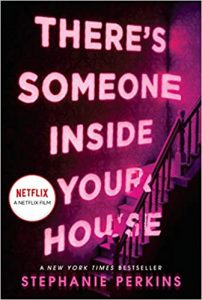 Director Patrick Brice of the Creep series has taken on the film adaptation of There’s Someone Inside Your House alongside screenwriter, Henry Gayden. Brice’s last film, Corporate Animals is a comedy-horror flick starring Demi Moore and Ed Helms. When C.E.O. Lucy (Demi Moore) takes her staff on a team-building weekend spelunking in New Mexico, they get stuck in a cave…with monstrous consequences. With past work in light-hearted horror, Brice is the perfect selection to adapt There’s Someone Inside Your House for the screen. Screenwriter Henry Gayden is responsible for adapting the superhero character Shazam to the screen in the 2019 blockbuster film of the same name.

Sydney Park of spin-off series Pretty Little Liars: The Perfectionists stars in There’s Someone Inside Your House as Makani Young. This is a big year for Park with another film Moxie, directed by Amy Poller, also slated for release this year. Starring alongside Park are Sarah Dugdale of Virgin River and Theodore Pellerin of Genesis fame.

It’s not easy, but some films have successfully captured equal laughs and scares in the same film, especially in the ‘90s. Slasher classics like Scream and Idle Hands geared toward young adults were huge in the ‘90s, a decade currently en vogue with today’s youth. It seems like There’s Someone Inside Your House aspires to incorporate this aesthetic in a way that is (hopefully) original and fresh, not derivative. There’s a delicate balance required for such a job, and Patrick Brice has proven himself capable of walking this fine line as a director.

If you enjoyed this piece, check out this article on The Girl at Midnight series adaptation!