The 5 Most Anticipated Film Adaptations of 2021

Every article published in the beginning of 2021 is going to begin with reminding its audience what a weird year 2020 was, and this article is certainly no exception, because HOLY CRAP, what a weird as hell year in every single aspect.

But, for this article, I am going to focus solely on the film industry—specially, how future releases have become so difficult to predict. With 2020 we have learned release dates are tentative at best. A lot of the films on this list were intended to see the light of day in 2020, but…here we are, fresh into 2021, with everything delayed. I cannot promise every movie listed here will actually come out in 2021, but it’s pretty likely, especially with the latest HBO Max controversy. There are other movies in the works that MIGHT come out this year, but I did not feature them in this article due to lack of commitment on the marketing side of things. For instance, surely Scorsese’s adaptation of David Grann’s KILLERS OF THE FLOWER MOON is set to come out sometime soon, right? And what about Claire Denis’s adaptation of Denis Johnson’s THE STARS AT NOON?

Oh, I am maaaybe looking forward to the film adaptation of my own novella, WE NEED TO DO SOMETHING, but it’s probably in poor taste to list it in this article—plus, who knows at this point when it’s even going to come out. I hope in 2021! At the time of this writing, it’s still in post-production. Read about how I got it adapted HERE.

So, with that out of the way, here are some UPCOMING 2021 film adaptations I am very excited to eventually watch, whenever they actually come out. Fingers crossed it’s this year.

5. THE WOMAN IN THE WINDOW

Let’s start with one of many films originally scheduled for 2020. THE WOMAN IN THE WINDOW is a book I love to talk about, due to the batshit controversy behind its author, Daniel Mallory (writing under the name “A. J. Finn”). If you are not already familiar, please go read this insane NEW YORKER piece immediately. The book itself is something I haven’t read, although some folks have claimed the plot bears strong similarities to SAVING APRIL (2016) and COPYCAT (1995). The film adaptation, directed by Joe Wright (DARKEST HOUR), stars Amy Adams, Gary Oldman, and Anthony Mackie. What has me excited for this movie, however, is who they hired to write the screenplay: Tracy “the GOAT” Letts. If you aren’t familiar with Tracy Letts, you haven’t truly lived. One of the best playwrights to have ever graced this planet with his presence, he’s responsible for brilliant works you’ve probably read and/or seen like BUG, KILLER JOE, and AUGUST: OSAGE COUNTY (he wrote both the plays and screenplay adaptations). If this movie is good, it will be because of Tracy Letts. Mark my words. THE WOMAN IN THE WINDOW is set to launch on Netflix sometime in early 2021. 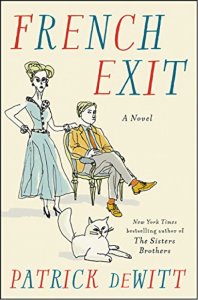 Patrick deWitt is an author I discovered sometime last year, in anticipation of his other recent adaptation: THE SISTERS BROTHERS. If you haven’t read and watched THE SISTERS BROTHERS, go do that, you fool! Both the book and the film are truly excellent ways to spend your time. So, it’s no surprise that I am eager to check out the upcoming adaptation of his other novel, FRENCH EXIT, directed by Azazel Jacobs (THE LOVERS) and written for the screen by deWitt. I haven’t read this novel yet, but I own it and plan to crack it open soon. The brief plot synopsis for the film reads as follows: “A close-to-penniless widow moves to Paris with her son and cat, who also happens to be her reincarnated husband.” Michelle Pfeiffer (SCARFACE) plays the widow, with Lucas Hedges (LADY BIRD) playing the son. From looking at the other credits listed, I am 95% sure Tracy “the GOAT” Letts voices the cat, which rules. It is currently scheduled to be theatrically released in the United States on February 12, 2021, but…again, who actually knows if that’s going to happen anymore. 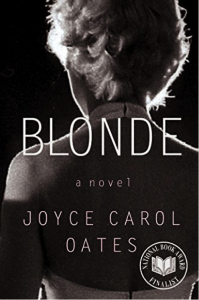 Whenever I research one of these lists, I find myself feeling like an absolute ignorant idiot person. Did you know Joyce Carol Oates wrote a novel chronicling the inner life of Marilyn Monroe? Because I sure didn’t! But alas, in 2000 she published BLONDE, and now Andrew Dominik (THE ASSASSINATION OF JESSE JAMES BY THE COWARD ROBERT FORD and KILLING THEM SOFTLY) has adapted it into a film starring Ana de Armas (BLADE RUNNER 2049, KNIVES OUT, etc) as Monroe, with a hell of a backup cast consisting of people like Adrien Brody, Julianne Nicholson, Garret Dillahunt, and Scoot McNairy, among many others. I love Dominik’s work with a passion, and he has more than proven when you want a book competently adapted, he’s the man you turn to. I predict this will be fantastic, and I haven’t even read the book yet. Look for it to drop on Netflix sometime this year.

Many people first heard about this movie only recently, after Variety published one of the dumbest posters anybody’s ever seen. If you somehow missed this truly hilarious image, do not fear: everything posted on the Internet lives forever. 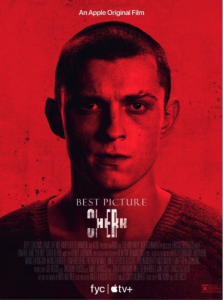 Evidently, this was not the actual poster Variety received from the film’s marketing department. Instead, it was a “digital misprint” on Variety’s end. It was promptly fixed to the correct poster, but not before the entirety of Twitter got a chance to dunk on it. Not to get too QAnon, but I personally suspect this was an intentional mistake planned out to gain extra attention. The best way to attract ultimate attention to anything on the Internet is by hilariously screwing something up, and this CHERRY poster fiasco is almost…too perfect, you know? Anyway. I read the novel back when it came out in 2018. The author, Nico Walker, wrote it while serving time in a federal prison for bank robbery. The novel tells the story of an unnamed narrator dropping out of college, enlisting in the military, falling in love, getting addicted to opioids, and becoming a bank robber. I thought it was very good, and I’m looking forward to the adaptation starring Tom Holland and directed by the Russo brothers. CHERRY is scheduled to be released in theaters on February 26, 2021, and on Apple TV+ on March 12, 2021. 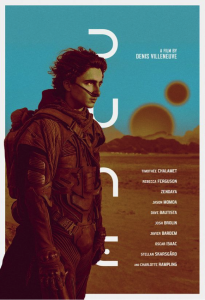 This is probably the Big One everybody’s excited to watch. Based on Frank Herbert’s iconic 1965 novel, Denis Villeneuve (BLADE RUNNER 2049) will be releasing the first part of a planned two-film adaptation in October, playing in theaters while also simultaneously streaming on HBO Max. The cast is…well, pretty insane. Check it out: Timothée Chalamet, Rebecca Ferguson, Oscar Isaac, Josh Brolin, Stellan Skarsgård, Dave Bautista, Stephen McKinley Henderson, Zendaya, David Dastmalchian, Chang Chen, Sharon Duncan-Brewster, Charlotte Rampling, Jason Momoa, and Javier Bardem. After BLADE RUNNER 2049, I am fully confident this movie is going to kick ass. The good news is you have like nine months still until it comes out, which should be exactly enough time to go read the source material (unrelated, it is also an adequate amount of time to conceive a child).