Calling all lovers! There’s a new romance-laden adaptation coming out in March just for you. This film has all of the romantic nostalgia of The Notebook in a modern story that flashes back from modern-day London to the French Riviera of the 1960s. The Last Letter From Your Lover by Jojo Moyes hit shelves in 2012 via Penguin Random House. Now in 2021, it’s a Netflix film starring Felicity Jones and Shailene Woodley set to premiere this March. Wondering what it’s all about? Then read on my friends, and prepare to fall in love all over again. 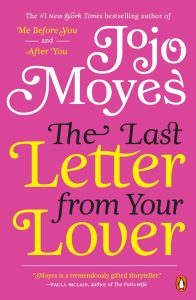 When contemporary London journalist Ellie Haworth finds passionate love letters written by Jennifer Sterling in the archives at work, their lives become entwined. Having lost faith in love after a serious breakup, Ellie finds solace and inspiration in the letters from Jennifer written to her lover Anthony O’Hare. Through them, she learns it is possible to love with a burning intensity she’s only read about in fiction. As Jennifer reads the letters, we follow Ellie through her star-crossed relationship with Anthony, jumping from modern-day London to the ‘60s Riviera. The deeper she digs, the more Jennifer becomes obsessed with their story and determined to uncover the identities of the lovers to find out how the affair ends.

Last Letter From Your Lover has a multi-narrative structure. We follow both the progression of Jennifer’s modern life in London and Ellie’s ‘60s love life on the Riviera.

Last Letter From Your Lover began filming back in October of 2019 in Mallorca, Spain and the UK. The film was produced by Pete Czernin and Graham Broadbent of Blueprint Pictures, the production company that brought us Emma., and Three Billboards Outside Ebbing, Missouri. Canadian production company The Film Farm is also behind the production, as is UK distributor StudioCanal.

The Last Letter From Your Lover premieres on March 11 on Netflix.

If you enjoyed this piece, check this article on Stephanie Land’s ‘Maid‘ Adaptation