James Ellroy is bringing American Tabloid to the podcast platform Audio Up in a 12-part series. This may surprise some, but the author of noir crime classics The Black Dahlia and L.A. Confidential is becoming familiar with adapting his own work to the podcast format. Earlier this year, Ellroy began working on a podcast called Hollywood Death Trip, also for Audio Up. Now he’s bringing American Tabloid to the streamer and it is sure to be a ranging banger–and a long-awaited one, too. Ellroy fans have been teased over the years with attempted film adaptations by David Fincher, Bruce Willis, Tom Hanks, and James Franco.

So, what makes this story so unadaptable? Well, the sheer scale of ‘American Tabloid’ might be the reason it has consistently failed to come to life as a film. The epic spans a five-year period so packed with important geopolitical events it would cost a few hundred million to recreate. 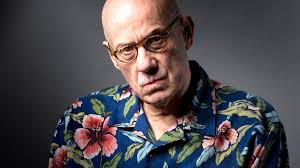 For those who don’t know, Ellroy is a neo-noir genius with a penchant for re-telling history more truthfully than the accepted truth. Although often outlandish, Ellroy’s treatment of history reveals deeper truths about the nature of power within the context of the most important and incendiary events that made 20th century America. This is the juicy stuff you won’t read about in the tabloids, baby. 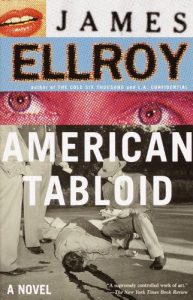 American Tabloid is the first book in Ellroy’s Underworld U.S.A. Trilogy, a window into the criminal underworld involved in pulling the strings behind major world events in cahoots with the U.S. government. The book outlines the events leading up to the assassination of JFK as seen through the eyes of the men who committed the murder. The conspiracy goes deep, starting in 1958 and ending in 1963 with the president’s assassination.

Some of the most powerful 20th-century men populate ‘American Tabloid,’ including J. Edgar Hoover, Howard Hughes, Jimmy Hoffa, and the Kennedys. The principal players are fictional crooked lawmen Pete Bondurant, Kemper Boyd, and Ward Littell. At the novel’s onset, Bondurant is a former LASD deputy running small-time shakedowns for Hughes. The latter are partner FBI agents monitoring Communist Party activities. Bondurant’s mafia shakedowns and Littell and Boyd’s eventual connections to Bobby Kennedy and Jimmy Hoffa entwine the three in a politico-mafioso maelstrom of commies, drugs, and power players. The characters become entrenched in mafia activities tied to the highest levels of American, Guatemalan, and Cuban governments. The story culminates with the assassination of President John F. Kennedy but that’s no spoiler. It’s the how and why of it all that keeps the pages turning.

Coming Soon to Audio Up

Heroin, mafiosos, and the gritty glamour of mid-century Los Angeles and Chicago spell noir gold. American Tabloid has it all, and it’s all coming to Audio Up. The streamer hopes American Tabloid will cement their reputation as forerunners of the epic podcast format. In a statement to Deadline, Audio Up Founder and CEO Jared Gutstadt says:

“James Ellroy trusting us with his legacy is a huge testament to how we handle other people’s IP. At the outset, we sought to become an ecosystem where super creators can rely on us for entry into the world of podcasts. This is a big moment for Audio Up.”

If you enjoyed this piece, check out ‘The Wheel Of Time’ By Robert Jordan Is Coming To Amazon.