Want to know what’s up with the Indian YA scene? Mumbai-based production company Abundantia Entertainment has the goods and they’re ready and willing to hook it up. They’re the ones responsible for the Amazon series Breathe and Breathe: Into The Shadows. Now they’ve acquired the rights to Apeksha Rao’s YA novel Along Came A Spyder. As a result, the company has its sights set on growing a larger YA fanbase in India. 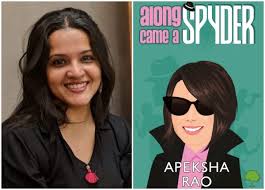 Spoiler alert, this book contains pimping! Wannabe-sleuth Samira discovers a secret sisterhood of teen spies when her friend from college is lured by a pimp. The group call themselves the Spyders and Samira intends to join. But will she be accepted into their world?

Along Came A Spyder is the debut YA novel from author Apeksha Rao. In this story based on her own childhood dreams of becoming a spy, author Apeksha Rao pours herself into the central character, Samira. Her grandmother is a former spy for RAW. This planted the seed in young Samira’s imagination that she too would one day become a spy. Little did she know that circumstances might lead her there sooner than she thought! At just 17 years old, Samira has already embarked on an amateur investigation to save her friend. This put her in touch with a crew of like-minded teen girls from Mumbai, the Spyders. As a result, Samira does all she can to get in good with the group and start her sleuthing career.

As a teenager, Rao’s dream was to become a spy working for India’s foreign intelligence agency, RAW. Instead, she decided to write about a band of teenage spies who were living the dream world she often inhabited. However, she put her writing life on the backburner for several years while becoming a practitioner of homeopathic medicine. But Rao recommitted herself to her original dream of fleshing out a band of spies in her novel. After having twins, Rao realized she wouldn’t be able to tell her kids to follow their dreams if she didn’t follow her own. So she began writing small pieces of flash fiction centered around each of the central characters in what would become her novel. With renewed courage and determination, Rao set to writing the book…and look where she landed! Her debut YA novel has been optioned by one of India’s largest production companies.

Vikram Malhotra, former Viacom18 Motion Pictures COO, is the man in charge of Abundantia Entertainment. Abundantia acquired the rights to Along Came A Spyder and will be developing the project under its new banner, Filters. The goal is to adapt the book as a series under Filters as a way to further explore India’s under-tapped YA market.

If you enjoyed this piece, check out YA Novel ‘We Hunt The Flame’ Adapted For STXtv