Image Comics’ Bitter Root centers around a family of monster hunters in New York City during the 1920’s Harlem Renaissance. However, the horror is not all supernatural. The story tackles racism and bigotry by using the monsters as metaphors for the racial intolerance that permeated the era.

A Harlem outbreak of an evil virus that turns infected people into racist monsters reunites a broken family of monster-hunters. But will they be able to get past their personal conflicts in order to save humanity?

Regina King, who made her feature-directorial debut last year with One Night In Miami, is directing the Image Comics adaptation.

David F. Walker and Sanford Greene collaborated on the adaptation of Marvel’s classic Power Man and Iron Fist. The creative team announced the Bitter Root series at the 2017 Image Expo. Fans who have been awaiting their follow-up to Power Man eagerly awaited the release of Bitter Root.

Walker and Greene teamed with co-writer Chuck Brown to recreate the Harlem Renaissance with a steampunk twist…and plenty of monsters. The characters battle on the streets of NYC with strange gadgets that are a marriage of wizardry and vintage technology. 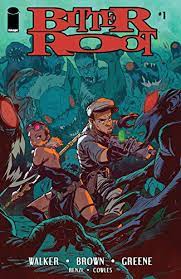 Bitter Root centers around the Sangerye’s, a family of monster hunters in charge of protecting 1920’s Harlem from supernatural forces. As with all families, the Sangerye’s have their own internal conflicts that threaten to tear them apart. But the stakes are higher than mere family drama. If the Sangerye’s are not firmly united, who will protect Harlem from the monsters? The Sangerye’s are faced with either healing their fractured past or succumbing to an evil that aims to destroy humanity.

Four-time Emmy-winning actress Regina King has directed TV for the better part of the last decade. However, her feature film directorial debut came last year with One Night In Miami which secured several awards nominations, including three Oscar nominations. Now she’s set to take on the Bitter Root series, which is currently in pre-production.

Legendary Entertainment, the company responsible for Godzilla vs. Kong, is producing the adaptation along with Proximity Media and Royal Ties.

Screenwriter Bryan Edward Hill is in charge of adapting the Image Comics series for the screen.

If you enjoyed this piece, check out 14 More Adaptations To Watch Our For In 2021