Graham Norton is not your typical debut novelist. If there is such a thing, anyway. Yes, this is the same guy who has been a UK celebrity for decades. Norton is an actor, comedian, and host of the five-time BAFTA TV Award-winning show, The Graham Norton Show. However, he’s not just a familiar face in the media. Norton is a New York Times bestselling author as well. Norton’s debut novel Holding came out in 2016 via Hodder and Stoughton. Now, his debut is in development at ITV. 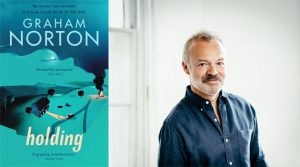 Norton wrote two more novels since Holding was published in 2016, including A Keeper and Home Stretch. However, this openly gay Irish TV personality is fairly new to the book-writing game. Norton made a household name for himself as an on-air host of various shows on BBC Radio. As a result, he became the host of his own TV talk show. Then, he achieved international celebrity as a presenter on the Eurovision Song Contest.

He’s also a respected figure in the LGBTQ community for being open about his sexuality throughout his career.

So, how did this talk show presenter get into writing books? In a Good Morning America interview, Norton says he set the goal of writing his debut novel on his 50th birthday. The author drew inspiration for the darkly comic novel from his upbringing in rural Ireland. According to Norton, every home in County Cork had some kind of scandalous affair happening. This material proved to be the stuff of magic. There’s a reason why the book debuted as a New York Times bestseller–it’s full of humor and heartache.

Holding takes place in the rural seaside village of Duneen, Ireland where everybody has a story. When a Duneen resident finds the remains of a prolific lover on an old farm, mediocre police sergeant P.J. Collins has to solve a crime for the first time in his career.

Hailed as both “darkly-comic and profoundly sad,” Holding explores the complexities of human nature through a host of characters. Norton takes the reader on a cathartic journey, as the characters quietly struggle with their own self-inflicted wounds.

ITV optioned the rights to Holding and has recently greenlit a four-part series adaptation. Conleth Hill, the Irish actor who played Varys in Game of Thrones, is attached to star as sergeant P.J. Collins.

Port Pictures’ Martina Niland is also producing along with Screen Ireland. ITV Studios will distribute the series internationally. The series is slated to begin filming this summer.

connect with readersFilm 14writing
STAY IN THE LOOP
BOOK TRAILERS