Trailer Reveal: The Land Without Color

Benjamin Ellefson is the author of The Land Without Color, a fantasy series for young people full of valuable real-world lessons. Below is the official trailer reveal! This middle grade fantasy book trailer produced by Film 14 and directed by The Deka Brothers (Half Bad, Sweet Adventures of Henry P. Twist). Here Ellefson shares his inspiration for writing, offers a window into The Land Without Color series, and touches on how making a deliberate choice to self-publish has helped him connect with fans.

What inspired you to write The Land Without Color series?

I was inspired while watching the documentary film The Secret of Oz. It is about the famous book The Wonderful Wizard of Oz and all of the influences that went into that book.

While watching it, I imagined a young boy blowing a bubble-gum bubble, floating above the clouds, and landing in a strange world. This was the initial spark for The Land without Color.

I spent months jotting down ideas as they popped into my head. Soon, I had a rough outline in place. I set aside two weeks and sat down and began writing.

I hadn’t written since school and I wasn’t sure I could do it. But by chapter four, I knew something special was taking life. 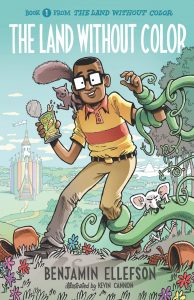 Tell us about the themes that are important to you and why you chose to explore them in this series.

My daughters were between the ages of six and twelve when I started writing The Land without Color. So I always had them in mind as I created the book.

I wanted to fill it with important messages and themes that young children could enjoy and learn from. At the heart, it is about a brave little boy who stands up for what he believes in against everyone, including the king, telling him that he was wrong.

It also has many moments showing the importance of self-reliance and preparedness. One of my favorite things I added was the rally cry “Eat Your Vegetables” to the story. So many children naturally gravitate towards sweets. This story teaches them the importance of eating your vegetables, both literally and metaphorically.

How did you get into writing fiction for young people? Do you dabble in any other genres?

I have always been a child at heart. I never let go of my imagination and wonder when looking at the world. So, I’ve always been fascinated with everything fantasy and adventure.

I have a strong love of scary movies and did contemplate writing more serious horror novels. But when I was truly inspired to pick up the pen, it was the grand adventures of The Wizard of Oz, Narnia, and The Phantom Tollbooth that were closest to my heart.

What route did you take in publishing this series and why?

After much research and thought, I decided to proudly be an independent author. At my core, I am an artist. So I need to create my art organically without the constraints of a publishing company tweaking and altering my stories until they are unrecognizable.

This gives me the ultimate joy of being able to connect with my fans in a way that traditional authors are often sheltered from. Through my mailing list and fan club, I love to give my fans exclusive behind-the-scenes looks into my writing and books.

What gets you fired up about writing?

I get the most excited when I’ve finished my outline and finally sit down to write out each chapter. That is when the story and characters in my head come to life.

I’ve already decided on all of the major plot and character points in my outline, but the little details unfold as I write each scene. I feel like a story weaver, tenderly weaving the different, important parts of the story together as each word hits the page.

This is where the characters flesh out and change from two to three dimensions. They change from an idea to a living breathing character. It is the spark of imagination that brings them to life.

How do you plan on using your book trailer to promote The Land Without Color series?

The book trailer for The Land Without Color will forever hold a prominent spot on my author website and Amazon author profile. Recruiting my fan base and blasting on social media. Once the fanfare dies down, I’ll continue to use the trailer for ads on Facebook, Twitter, and YouTube to reach new audiences.

Do you have any new projects in the works?

I am currently working with my illustrator and book designer on publishing the first in a seven-book series. It is titled Lexi Vega and the Starlight Stone. It follows the adventure of a 12-year-old girl from Colombia who has the gift of imagination. When she finds a mysterious starlight stone, she discovers that she can hop into any of her drawings and explore that world, meeting the animals and people she drew.

Soon, a vile rabbit name Queen Hermosa learns of Lexi’s gift and wants to possess it for herself. Bent on control all of the worlds of the pictures, she unleashes her army of rabbits with a treasure trove of starlight stones.

Lexi teams up with an adorable bear cub and an infamous smuggler to unite the frogs, robots, and flying pirates against the wretched queen. Only by using her wits and imagination can Lexi outsmart the clever rabbits and bring freedom to all of the pictures.

Read the latest details on Lexi Vega and the Starlight Stone at https://www.benjaminellefson.com/lexi-vega-and-the-starlight-stone/