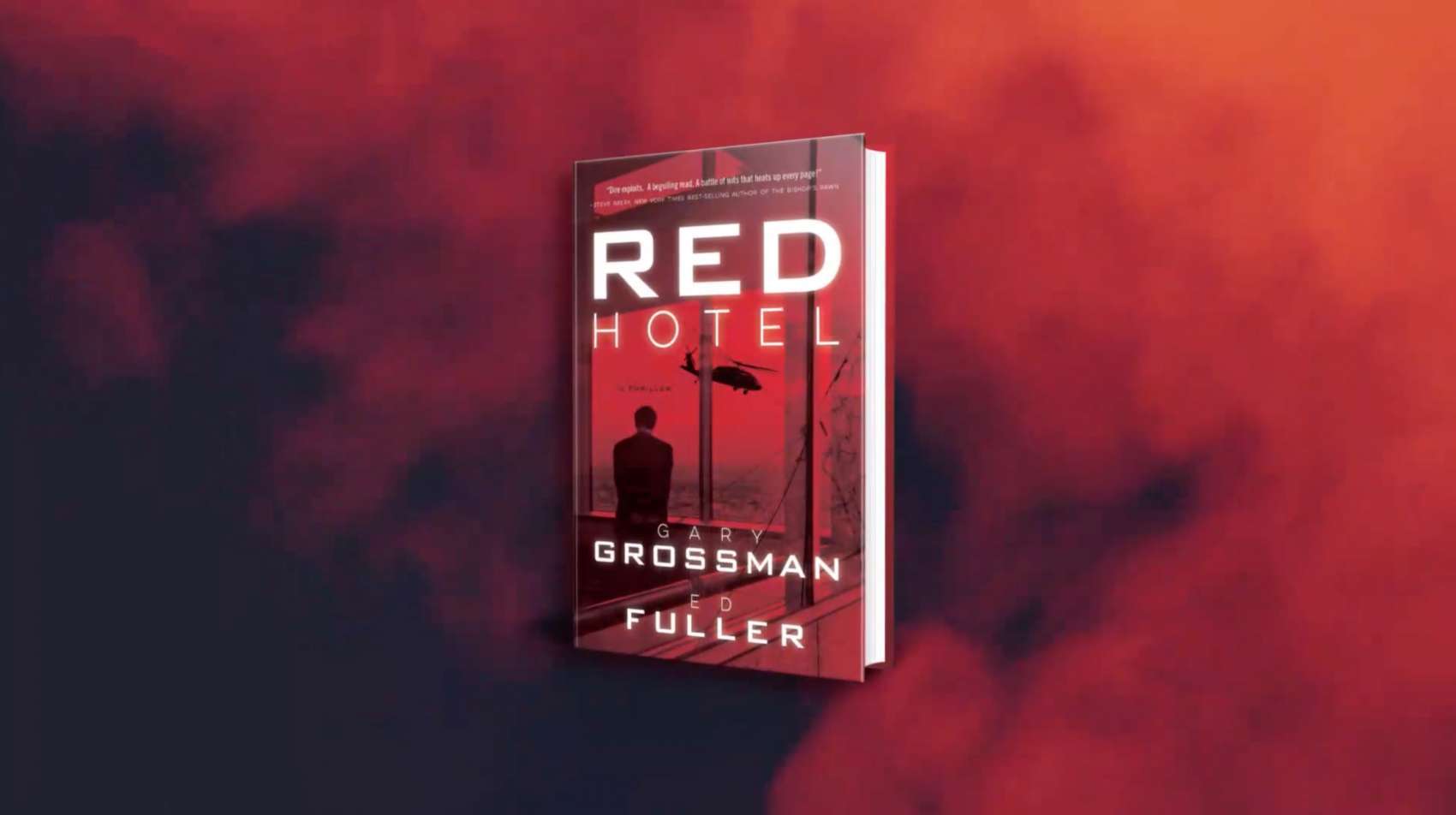 Film 14 recently released the book trailer for the thriller “Red Hotel.”  To highlight this wonderful book and the creative team behind it, we spoke with one of its authors, Gary Grossman, about the book, his career, and his experience making book trailers with Film 14.

Gary: “My book writing began with non-fiction works on early television history. However, it was in 2001, after I was in New York City on September 11th, that I considered writing political thrillers. The experience of being there on that day, at that time, changed me, as it changed the world. I began thinking about a plot that could take 30 or more years to incubate. And what could be worth the wait? The American presidency itself, plotted by a sleeper spy conspiracy. The thriller “Executive Actions” launched my career as a novelist. 18 years later and six books (with another nearly finished), I’m happy to add best-selling writer to my credits.”

Gary: “When a bomb rips the façade off of the Kensington Hotel in Tokyo, dozens are killed and injured while one man walks calmly away from the devastation. Former Army intelligence officer Dan Reilly, now an international hotel executive with high level CIA access, makes it his mission to track the terrorist down.”

3. What about “Red Hotel” separates it from other books in the spy/thriller genre?

Gary: “Red Hotel’s” exploits are based on the work of co-author Ed Fuller, the former President of Marriott International. In reality, Ed created the threat assessment warning system that’s integral to the plot of the book. He supervised the recovery after the hotel bombings in Jakarta. He arranged to get guests and staff to safety in Cairo after the fall of Mubarak, and likewise in Tripoli when Gaddafi’s regime ended. He’s stood face-to-face with Mexican cartel leaders, negotiated the release of kidnapped staffers in two continents, and regularly consults with America’s foreign intelligence agencies. Ed Fuller is the real deal.”

Gary: “Traveling is dangerous. We need to be more aware of our surroundings. As the saying goes, “If you see something, say something.” It’s an ever-present theme in “Red Hotel” and there are relevant tips in the book. When staying at a hotel, book lower floors; low enough for firetruck elevators to reach. Sit facing out at tables in order to better scan the surroundings. Be aware of people taking excessive photographs of a hotel exterior or interior, they may be casing the property. And for housekeepers, if you spot multiple discarded battery wrappers, bring it up to security. Batteries are used in explosive devices.”

Gary: “Our ideal readers are fans of political thrillers, international thrillers, and mysteries. But, because “Red Hotel” is so relevant and close to the news, travelers should also be engaged. We hope the read entertains, but also makes people more aware.”

Gary: “There’s intrigue at hotels. There are guests from around the world with multiple languages being spoken at international properties. But there are secrets and spies, surveillance devices, and in some countries, recordings. Hotels are often considered soft-targets. Under Ed Fuller’s term, he sought to “harden” them with visible defenses that would deter attacks. The core of that effort is essential to the plot of “Red Hotel.”

Gary: “One evening I was walking our little dogs and bumped into a friend with his dog—Bruce Feirstein; who wrote the screenplays for the first three Pierce Brosnan “James Bond” films. Bruce said he had an associate from a Boston University board who was interested in co-authoring a book with a thriller writer. He told me about Ed, and I wondered,“What I would have in common with the former President of Marriott International?” Once I met him, it took me no more than thirty-seconds to realize he was as much in the anti-terrorism business as the hotel business.”

Gary: “Our collaboration is wonderful and is extending into the first of multiple “Red Hotel” sequels. Ed and I talk through his experiences. I learn more each time we meet, which is often. We outline plots together, I begin writing, and we work through rewriting and focusing on the plot points. It’s creative, exciting, and absolutely fulfilling. I can’t imagine a better partnership.”

Gary: “The great thriller writers of our time: Lee Child, Dale Brown, David Baldacci, Michael Connolly, John Sandford, WG Griffiths, Daniel Palmer, Steve Berry, KJ Howe, Jon Land, Brad Meltzer, and of course Tom Clancy and Vince Flynn, among many others. The first political thriller I read was Fletcher Knebel and Charles W. Bailey II‘s “Seven Days in May.” It resonates as much today as when it was first published. It’s a chilling read, which is what we aim for.”

Gary: “Depends on who’s calling what a conspiracy. I tend to follow the intelligence experts. They’re usually right.”

Gary: “My first book trailer with Film 14 was for “Executive Command,” the third book in my “Executive” series. Film 14 produced an extraordinary video that went viral. And when I say extraordinary, it was extraordinary! The second one they did was for “Old Earth.” Film 14 approached this geological thriller like a feature film. The work led to incredible success, sending “Old Earth” to the top of Amazon’s mystery thriller list.”

Gary: “Film 14 reads the books and then develops a plan and a script that strategically hits the core of the plot. They book actors, shoot domestically and internationally, and deliver above and beyond. Where many other authors just employ slide shows to market their books, Film 14 produces motion picture-level trailers that give life to the characters and excitement of the books.”

Gary: “All online booksellers including Amazon, Barnes & Noble, and bookstores.”